Just a year ago, on March 11, 2020, the World Health Organization declared COVID-19 a global pandemic.  According to WHO, the virus has infected over 135.65 million people worldwide and 2.93 million death, as of 31 March. To control the infection, the associated lockdowns have devastated economies. Analysts have identified the pandemic as a turning point in world history, with ramifications for everything from climate change to the global balance of power. 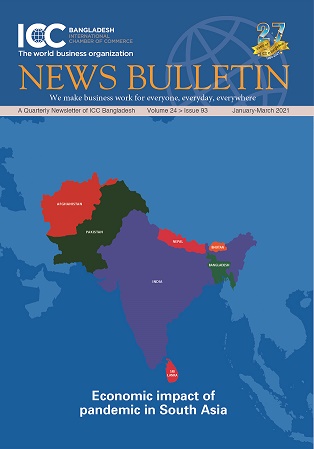 South Asia has done better in containing the pandemic in the form of a single metric: the number of deaths from COVID-19 per million people. According to World Bank South Asia Economic Focus released on 31 March, prospects of an economic rebound in South Asia are firming up as growth is set to increase by 7.2 percent in 2021 and 4.4 percent in 2022, climbing from historic lows in 2020 and putting the region on a path to recovery. But growth is uneven and economic activity  is still well below pre-COVID-19 estimates, as many businesses need to make up for lost revenue and millions of workers (mainly informal sector), still reel from job losses, falling incomes, worsening inequalities, and human capital deficits.

The Region is set to regain its historical growth rate by 2022. Electricity consumption and mobility data is a clear indication of recovering economic activity. India, which comprises the bulk of the region’s economy, is expected to grow more than 10 percent in the fiscal year 2021-22-a substantial upward revision of 4.7 percentage points from January 2021 forecasts. The outlook for Bangladesh, Nepal, and Pakistan has also been revised upward, supported by better than expected remittance inflows, WB added.

According to United Nations World Economic Situation Prospects (WESP) 2021 released in January, the pandemic and the global economic crisis have consequently left deep marks on South Asia, turning this former growth champion into the worst performing region in 2020.

But to grow back stronger, South Asian countries will need first to redouble their efforts to diversify their economies, while at the same time taking stock of global trends initiated by the crisis, such as restoring of global value chains (GVCs) and a decreased appetite for contact-intensive services. Achieving resilience to external shocks should be among the most important considerations within the decision framework for policymakers in South Asia who are currently rethinking their industrial policies, UN WESP 2021 added.

According to World Economic Forum this crisis can also usher in a new era of collaboration in South Asia. Enhanced regional cooperation can bolster the region’s capabilities to fight the pandemic and its economic losses in the near term and simultaneously bring long-term benefits through increased intraregional trade, acceleration in shared growth and poverty reduction. Governments and businesses must come together to that e

In South Asia’s intraregional trade accounts for barely 5 percent of total trade, compared to the ASEAN region where intraregional trade makes up 25 percent. Trade among South Asian countries currently totals just $23 billion — far below an estimated value of at least $67 billion. Further, a seamless transport connectivity between India and Bangladesh has the potential to increase national income by as much as 17 per cent in Bangladesh and 8 per cent in India, the World Bank said.

However, 2nd/3rd wave of Covid-19 and other new variety of virus have already spread all over the world. The whole world again advancing towards lockdowns and other social restrictions, which will impact the region’s economy further. At thus circumstances, it is unpredictable to estimate further economic damages. But as most of the South Asian countries are able to manage crisis, it is of utmost importance for the governments and all stakeholders to work together and share their experiences, like in the past, to face the challenges successfully and lead the world economy in future.