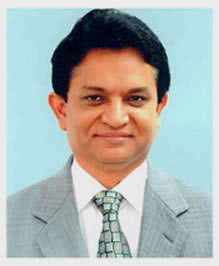 A. K. Azad
Executive Board

Mr. A. K. Azad, Vice President of ICC Bangladesh, The world business organization is the  Founder Chairman and Managing Director of  Ha-Meem Group of Companies, one of the leading corporate houses of Bangladesh.  Ha-Meem group has achieved outstanding success in expanding the ready-made garments sector of Bangladesh under his leadership.

The readymade garment sector of Bangladesh has not been successful throughout the course of history. It has faced numerous downfalls, to the point when the international community had started to think that the industry could not be established in Bangladesh. Mr. A. K. Azad was one of the individuals who worked hard to save this industry and helped it flourish.

Mr. A. K. Azad was born on December 31, 1959 in Jhiltuli, Faridpur. He completed his B. Sc in Applied Physics from the University of Dhaka. After completing his graduation, he became involved with business. He faced multiple struggles and overcame numerous obstacles in his life before finally starting his own company – ‘Ha-Meem Group of Companies’.

Under his watch, the reputation of Ha-Meem Group of Companies spread across the country and crossed the border to the international market. This company has a vast contribution behind the economic growth of Bangladesh. He does not believe in business just for the sake of profit. According to him, business can be a solution to the existing unemployment problem; it can increase the GDP of the country and help the economy to be more developed.

He is also the Founder of the most popular daily newspapers and Electronic Media in the country – The Daily Samakal and Channel 24 respectively. His father was a renowned Social Worker and as a worthy son, he upheld his good name. He has contributed a lot for the development of the educational sector of the country. His sons and daughters are highly successful in their own fields.

Mr. A. K. Azad has been honored with numerous socio-economic awards for his achievements over the years.